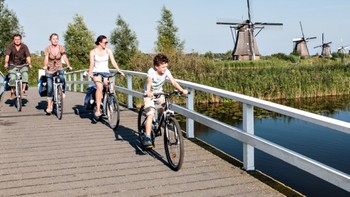 The famous Internationale Rijnroute (EuroVelo 15 – Rhine Route) covers a distance of 1,230 kilometres. The route starts at the source of the Rhine in Switzerland and takes you via Germany to the Netherlands, up to the Rhine’s estuary in the North Sea. The route is signposted in two directions and is included in an English cycleguide.

Cycle maps and guides
Separate cycle guides and maps are available of all international routes, including, of course, in languages other than Dutch. They can be purchased at specialist bookshops or ordered online at the online shop of the Fietsvakantiewinkel. Stichting Europafietsers has developed several cycle routes to attractive destinations such as the Mediterranean Sea and Santiago de Compostella.