Coronavirus and tourism in the Netherlands

Together, we’ll get coronavirus under control in the Netherlands. On a special website of the Dutch government you can find actual information and Q&A about the current situation.

If you are putting together your own cycling holiday, the best thing to do is to follow the LF routes: linear cycle routes which are intended for cycling from a to b. And whether you are camping or prefer having a proper roof over your head, you won’t have any trouble finding a nice place to stay thanks to a great choice of cycle-friendly accommodation in the Netherlands. Don’t fancy organising everything yourself? Just let one of the many companies who provide cycling packages do it for you!

LF routes
LF routes are national cycle routes (together approximately 3,300 kilometres; january 2021) and perfect for multi-day cycle trips. These long-distance routes are signposted in two directions with rectangular white signs with green lettering. The signs show the route number, the route name and a directional arrow. The addition of ‘a’ or ‘b’ indicates the direction: direction a (e.g. LF14a Saksenroute) usually goes from North to South or from West to East, and vice versa for direction b. From 2019 new LF signs appeared in the field. Juni 2021 four routes do have this new signage. The signs are a bit smaller and have a simple, clear print.

You see them in two directions, always in combination with a junction sign.

From LF network to LF icon routes
Now that there’s a nationwide network of junction routes, we’re turning the LF network into a select number of national top routes that every serious cyclist would want to have completed. The LF Maasroute is the first of the new LF icon routes on which the Fietsplatform will focus the LF network in the coming years. The routes are given a strong theme, the signposting is being updated and an app and special LF website have been created for additional up-to-date information. Summer 2020 the new LF Zuiderzeeroute and LF Kustroute are launched.

Summer 2021 LF Waterlinieroute was added to the range. Also some older LF-routes are being remediated, among which LF15 en LF20. And in 2021 also LF7 and LF2.

Ultimate route
The ultimate route for any holiday cyclist is the Ronde van Nederland (Tour of the Netherlands) via LF routes. This tour strings together several (sections of) LF routes into a tour of almost 1,400 kilometres. Anyone who completes this route receives a certificate and is listed in the hall of fame at nederlandfietsland.nl on our Dutch website.

Internationale routes
Dutch LF routes don’t end at the border. There are plenty of options to cycle on to Belgium, Germany or Great Britain. More and more European countries provide long-distance cycle routes. Some LF routes are part of international routes, for instance the Rijnfietsroute (Rhine Cycle Route) and the LF Maasroute (River Maas Cycle Route).

Well prepared
When organising your own cycling holiday, make sure to always prepare your trip properly. After all, well begun is half done. The LF routes are included in various cycle maps and guides. See the GPS tracks of all LF routes or check the cycle route planner. Don’t have a (good) bike? Not to worry, there are many places where you can hire a bike. There may be times when taking the bike on the train would be useful. For instance, to return to your starting point. For more information about this, please see Cycle transport and repair.

Accommodation
So you have chosen your route? Great, but there are more decisions to be made because where will you stay? In a tent at a natuurkampeerterrein (national park camp site) in a stunning, scenic location, or in a hiker’s hut? Or do you prefer a hostel, guesthouse or comfortable four-star hotel? Choices galore. In the Netherlands, cyclists like to stay in cycle-friendly accommodation.

Cycling packages
Chances are you won’t feel like planning your own route and looking for somewhere to stay. You are on holiday after all. No problem! There are many cycling holiday providers in the Netherlands who offer a wide range of all-in cycling packages including one-base cycling holidays or touring holidays, group or individual travel, with camp-site or hotel accommodation. For more information, check out Cycling packages. 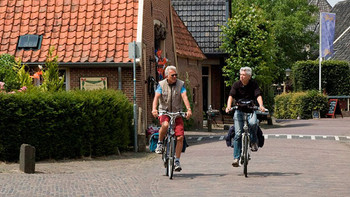 So you have decided to visit the Netherlands for a cycling holiday? Armed with practical information about cycle-friendly places to eat, drink and stay; cycle hire and parking; and cycle transport, you are in for a smooth cycling experience!

Dutch LF routes don’t end at the border. There are plenty of options to cycle on to Belgium, Germany or Great Britain. More and more European countries provide long-distance cycle routes. Some LF routes are part of international routes, for instance the Rijnfietsroute (Rhine Cycle Route, EuroVelo 15).

Maps and guides form the basis of your cycle trip, both for a multi-day cycling holiday or a short trip. What cycle guides and maps are available for the English cycle tourist? We list some of the guides.